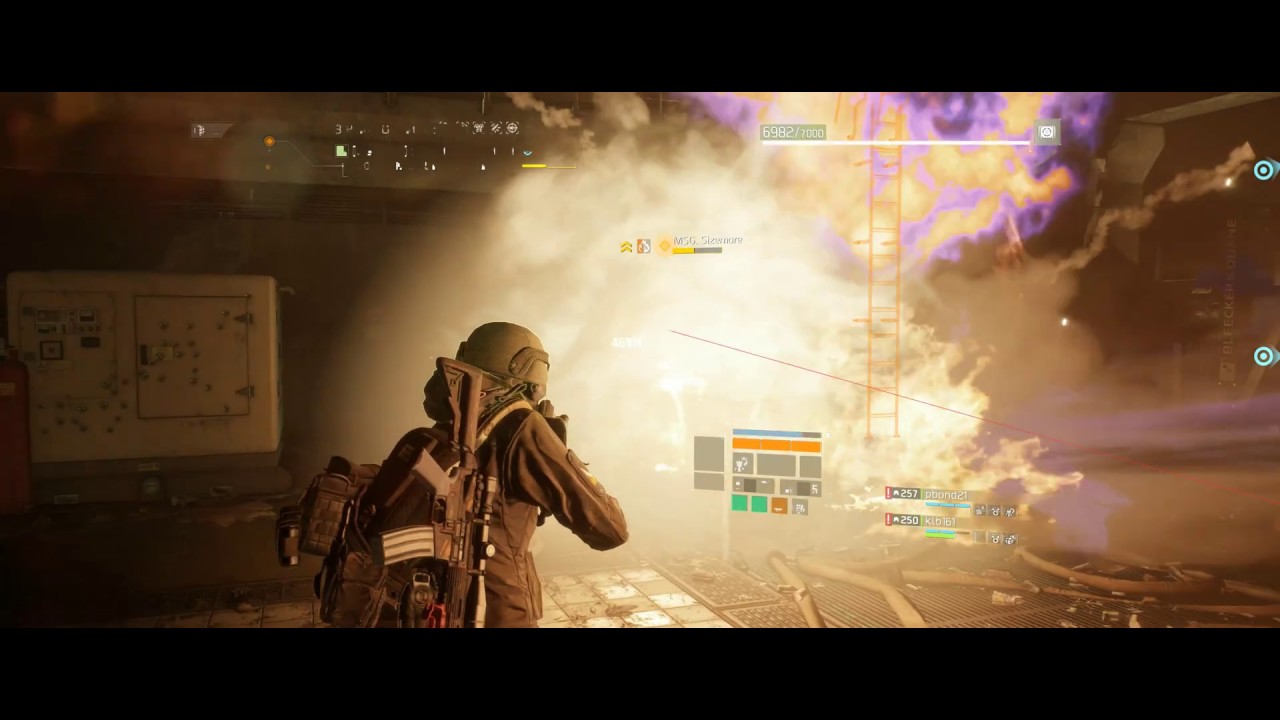 Striker is all about being offensive. And in order to be able to play offensive you need to balance offensive,defensive and sustain.

6piece classified striker gives a base of 0.01% health/second as regen.

And since regen is based on your total, and the stamina itself also boost your base health the actual health/second increase is alot more then it would seem.

9k striker should have roughly 420k total health, so 67k heal/second with 100stacks.

As reference the reclaimer support station gives about 33k heal/second with 10k electronics.

So to sum things up 9k striker provide almost double the healing, while doing about 30% less damage.

But calculated damage does not mean practical damage. In reality the additional healing and max HP allows you to:

Never needing to hide in cover, so you always have a target to shoot at (more damage over time and faster stacks).

You can move closer to the targets, easier to land hits and force enemies out of cover (more damage over time).

Being closer, you can land headshots more consistantly (more damage over time).

At the end of the day, in most situations, you will end up doing alot more damage over time.

Additional damage dealt with a critical hit from the primary weapon

Damage dealt per bullet with a bodyshot from the primary weapon

Damage dealt per bullet with a headshot from the primary weapon

Optimal range for the primary weapon

Reload time for the primary weapon

Additional damage dealt with a critical hit from the secondary weapon

Damage dealt per bullet with a bodyshot from the secondary weapon

Damage dealt per bullet with a headshot from the secondary weapon

Optimal range for the secondary weapon

Reload time for the secondary weapon

Critical hit chance with the sidearm

Additional damage dealt with a critical hit from the sidearm

Damage dealt per bullet with a bodyshot from the sidearm

Damage dealt per bullet with a headshot from the sidearm

Optimal range for the sidearm

Reload time for the sidearm

The minimum amount of firearms this build will have

The minimum amount of stamina this build will have

The minimum amount of electronics this build will have

Improves the cooldowns of skills

Toughness is a combination of max health and armor

Additional mitigation vs damage from Elite and Named enemies

How much exotic damage is mitigated

How high a resistance to Bleeding this build will have

How high a resistance to Blindness/Deafness this build will have

How high a resistance to Burning this build will have

How high a resistance to Disorientation this build will have

How high a resistance to Disruption this build will have

How high a resistance to Shock this build will have

Medkit now heals over 10 seconds and will not stop healing when taking damage.

Heal an ally with a skill to reduce skill cooldowns by 15%.

Suppress a hostile to increase movement speed by 25% for 10 seconds.

Revive a downed agent to reduce incoming damage by 30% for 10 seconds for both players.

Use a medkit during low health to increase damage resistance by 20% for 10 seconds.

Applying Bleed to any target triggers 30% chance per each target within 10m radius.

Use a medkit near allies to heal group members and proxies within 20m by 40%.

Complete a cover to cover move to increase damage by 2% per meter covered for 5 seconds.

Kill a hostile with an explosion to increase explosion damage by 20% for 15 seconds.

Kill a hostile with any skill for a 10% of auto refilling all ammo types to capacity.

Applying Shock to any target triggers 30% chance per each target within 10m radius.

During a cover to cover move incoming damage is reduced by 30%.

Kill a hostile why any skill is deployed to extend any active skills duration by 10%.

Applying Burn to any target triggers 30% chance per each target within 10m radius.

Destroy a hostile's deployed skill to increase Skill Power by 20% for 30 seconds.

Enter any cover to reduce recoil by 25% for 10 seconds.

Kill a hostile while moving to reduce incoming damage by 15% for 10 seconds.

Headshot a hostile to pulse them for 10 seconds.

Damage multiple hostiles with an explosion to apply 20% more damage from the blast.

Suppress a hostile to increase headshot damage by 25% for 10 seconds.

Kill a hostile with the sidearm to receive 30 rounds for your primary weapon.

Headshot a hostile to have a 50% chance of not consuming the bullet.

Sends out a recon pulse that marks allies and hostile through walls and covers.

The pulse has an increase range and is capable of locating nearby loot containers.

The pulse protects the user and all allies from hostile pulse scans.

Damage is increase when attacking any hostile identified by the scan.

Heals all allies within a small radius. The device can be used on location or launched to a distant target.

Applies instant healing follow by a heal over time. The device can revive downed allies with a portion of their normal health.

The device heals targets more effeciently, and may even extend the target's health beyond its normal rating.

Temporarily increases damage and damage resistance for the affected targets in addition to the normal healing effect.

Drops a station that heals allies and can be used to revive downed allies.

Drops a revival station that automatically revives any allies who are downed within in the affected area.

Drops a recovery station that removes status effects and makes allies immune while in the affected area.

While close to the device, Allies regain their ammo as they reload, and skill cooldown recovery is faster.

Fires a bomb that sticks to most surfaces and explodes when detonated remotely.

Increases the damage and readius of the explosion and may cause targets to bleed.

The bomb explodes with a non lethal effect that blinds all targets in range.

The explosive is replaces with an EMP alternative, causing Disrupt effects to all targets in the area.

Deploys a stationary turret that attacks nearby hostiles until it is destroyed or its battery runs out.

Increases the turret's damage and pulses attacked targets, making them visible to all allies.

The turret has a reduced range but shoots a column of fire.

The turret shoots electrical darts that shock the target.

Releases an automated mine that seeks out hostile targets before exploding on proximity.

Upon impact, the mine is launched in the air and releases a cluster of small incendiary explosives.

Upon impact, the mine moves between multiple targets and releases a cloud of gas.

The mine seperates into smaller mines that seek out multiple targets simultaneously.

Equips a portable Ballistic Shield that absorbs damage. The user can only use their sidearms while the shield is active.

Equips a stronger and lighter shield that pulses hostiles who shoot at it.

Grants the user a small portion of incoming damage as healing.

Reinforces a cover, increasing weapon performance and damage mitigation for all allies behind it.

Allies in the affected area are buffed, while enemies are debuffed for the same amounts.

Allies using a reinforced cover slowly recover their health and get their skill cooldowns decreased.

Allies using a reinforced cover are hidden from hostile pulses and have reduced threat. Hostiles shot from allies behind the cover are pulsed.

Creates a temporary cover for one person, which provides standard cover protection until destroyed.

The cover is fitted with remote explosives that damage and blind hostiles in front of it when the shield is disabled.

While using the cover, the user deals increased damage and becomes immune to pulses.

Heals and cures the user and nearby allies. Revives all allies in range. Automatically triggers on lethal damage when not in a group.

Weapon enhancement system which provides temporarily increased damage and weapon performance to the user and all nearby allies.

Increases damage resistance and speed for group members and grants an emergency health boost to the user when taking lethal damage.

Accuracy is increased by 25%.

Using a skill increases your critical hit chance by 7.50% for 15 seconds.

Increase your damage by 10% against targets in cover.

Double trigger fires off both barrels in short succession.

Headshot damage is increased by 12% when using this weapon.

Each critical hit heals you and your group for 1% of your skill power. Can only heal each player every 0.20 seconds.

Using a skill improves the handling of your weapon for 15 seconds.

Hipfire damage is increased by 11%.

Shoots heavy slugs instead of buckshot.

Every kill performed while the Signature Skill is active extends its duration by 20%.

Weapon damage is increased by 10% for 15 seconds after using a skill.

Performing a headshot reduces all skill cooldowns by 5%.

Every bullet fired at an enemy from cover increases weapon damage by 0.5% up to 50%. The bonus lasts for 10 seconds. Getting a kill with this weapon while in cover resets the duration. The bonus damage is cancelled by reloading, swapping weapons, or exiting combat.

Critical hit damage is increased by 15%.

Armor destruction value is increased by 15% when using this weapon.

Killing a target will make your next shot with the weapon be an automatic critical hit.

Your damage is increased by 18% against targets with status effects.

Every kill performed while your Signature Skill is active reduces the cooldown of your other skills by 10%.

Increase your damage by 15% when elevated more than 1.2 meters above your target.

The weapon deals 100% more damage when the target is below 30% health.

Damage against Elite and Named enemies is increased by 10%.

Critical hit chance is increased by 5% when using this weapon.

When no skills are on cooldown, your weapon damage is increased by 10%.

Killing a target increases your damage with 10% until you stop firing. Multiple kills stack this bonus up to 5 times.

Each hit has a 15% chance to apply the Bleed Status Effect to the target.

Each bullet embeds itself in the target and detonates 1 second later for 700% of your firearms total.

Critical hits increase reload speed by 10% to a minimum of 1 second reload time.

The first bullet of a magazine has a 25% chance to apply the On Fire Status Effect to the target.

Destroying an enemy weak point resets skill cooldowns for you and your nearby group members. Can happen once every 10 seconds.

Killing a target has a 25% chance to instantly refill the magazine.

Each bullet you hit with reduces your damage by 1% and your target's damage by 1% up to a max of 20%. This effect is reduced by 5% per second.

Each kill makes the next reload have 20% extra bullets compared to its base.

Damage taken is reduced by 20% while firing. The taken damage is applied when you stop firing.

Damage is increased by 15% when more than 30 meters from the target.

The first bullet shot when out of combat has a 50% bonus chance to result in a critical hit.

Damage is increased by 10% when closer than 10 meters to the target.

Critical hits with this weapon heal the user for 3% of damage dealt.

Your accuracy with this weapon is increased the fewer shells you have left in the magazine.

Headshot kills with this weapon increase Signature Skill resources by 5%.

Killing a target increases your health by 6%.

Killing a target with this weapon increases Skill Power by 15% for 20 seconds. The effect does not stack. Killing a new target refreshes the timer.

Headshots with this weapon have a 15% chance to apply the Blind Status Effect.

Damage is increased by 15%, accuracy and stability mods reduce this bonus.

Each hit with Hildr increases critical hit damage by 1% to max of 30%. The bonus decreases by 1 every second. This bonus only applies to Eir.

Critical hit chance is increased by 10% while having more than two segments of health.

Killing a target with a headshot removes 100% sway from the weapon for 8 seconds.

You need to be logged in to add comments to builds